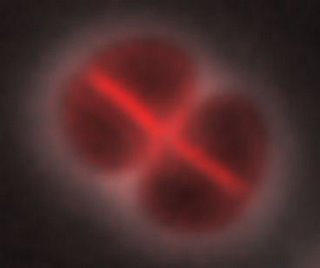 Death is the ultimate fate for most bacteria blasted by huge doses of radiation or parched by a severe lack of water. The genetic material irreversibly splinters into hundreds of pieces, dooming the organisms as surely as Humpty Dumpty.

But a few bacteria can "resurrect" themselves by quickly piecing their DNA back together—a strange ability that has mystified biologists for decades.

Now researchers have figured out how one species of these phoenix-like bacteria can rise from the ashes.

A group led by Miroslav Radman, a molecular geneticist at Université René Descartes in Paris, France, announces its findings today on the Web site of the journal Nature.

The organism can withstand massive doses of radiation and can even survive being completely dried out.

When that occurs, "there is no metabolism," Radman said. "The genome is shattered into hundreds of pieces. It is a dead cell.

"But out of this horrendous damage, it can resurrect."

DNA normally acts like a blueprint, telling cells how to cook up the proteins that make life possible (get a genetics overview).

But shredding these instructions renders them useless. Once DNA is split into multiple pieces, there's usually no way a cell's internal machinery can figure out how to piece everything back together again.

Reconstruction must be precise, because a message restitched in the wrong order is gibberish, dooming the organism.

Unlike most bacteria, however, D. radiodurans contains multiple copies of its genetic material, which can act as backups for each other, Radman says.

Since the spots where DNA breaks because of radiation or damage are random, each copy of the genetic material will likely have breaks in unique locations.

So if one DNA strand breaks into the split messages "Humpty Dumpty sat on a wall" and "Humpty Dumpty had a great fall", there's likely another chunk of material floating around that can bridge the gap.

The material might read "sat on a wall, Humpty Dumpty," for example.

The bacteria then chemically glue matching pieces together. Once they're bound, the cells fill in the missing parts of each of the two stuck-together copies, the study shows.

Using such clues, D. radiodurans can piece together all of its DNA in about three hours, even if it was split into hundreds of pieces.

"It's true that DNA is life," Radman said.

"As long as you can reconstitute the database of life, which is DNA, you can ... start life again."

The new study "is certainly the biggest advance in understanding the mechanism of radiation resistance" in this well-studied species, said John Battista, a biology professor at Wayne State University in Detroit, Michigan.

Other radiation-resistant microorganisms might use the same mechanism, Battista and Radman agree.

The process could also inspire ideas for repairing our own cells, Radman says.

"It could teach us, maybe one day, how to resurrect dead or close-to-dead neurons [brain cells]," Radman said.

"I joke in the lab that we're going to get a grant from the Vatican titled 'The Molecular Basis of Resurrection.'"
read the article in NATIONAL GEOGRAPHIC HERE

IF YOU WANT TO LEARN MORE SEE TELESAVOIRS VIDEOS