Research project title: BIOLOGY OF IMMORTAL AND ROBUST ORGANISMS: AN APPROACH TO PREVENTION OF AGING (BIRO)

Letter of support from the Host institution 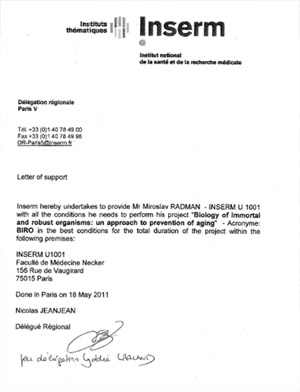 ring his impact in the area of research of DNA repair, mutagenesis, genetic recombination and the evolution of species. Originality is a trademark of this PI. The discoveries of the mutagenic SOS repair response in bacteria, base excision DNA repair endonuclease III (first discovered DNA damage N-glycosylase for oxidative damage repair), mutagenic trans-lesion DNA synthesis, mismatch repair, genetic barrier between closely related species, mechanism of nucleotide selection by DNA polymerases, role of mutator mutants in the adaptive evolution of bacteria and their resistance to antibiotics, first incipient (real-time) speciation of bacteria in the laboratory, first direct visualization, in real time, in living bacteria, at single cell level, of (i) the horizontal gene transfer, (ii) the chromosomal crossing over and (iii) all spontaneous mutations emerging in growing bacteria, the mechanism of the most efficient DNA repair system in the highly radiation-resistant bacterium Deinococcus radiodurans and the molecular basis of its robustness, are all  textbook materials.

The PI has been a “scientific nomad” working for extended periods in Croatia, Belgium, France, USA and again Belgium before settling down in France in 1983. Trained in physical chemistry (4 semesters), physics (4 semesters) and higher mathematics (3 semesters) while studying undergraduate biology at the University of Zagreb, M.R. became the assistant to Professor Ivan Supek (a Copenhagen school physicist also holding PhD in philosophy and a co-founder of the Pugwash movement) even before graduation. At age 23 M.R. went to the University of Brussels, as the first pre-doctoral fellow of EMBO, to study radiobiology with Professor Maurice Errera and phage l genetics with Professor René Thomas, where he got his PhD degree at age 25. Moved for a year to Paris to study bacterial genetics with Dr. R. Devoret, then became a post-doctoral fellow with Matthew Meselson at Harvard in the fall of 1970, when he conceived the SOS repair hypothesis published only in 1973. Nominated associate professor at the University of Brussels at the age 28, moved to Brussels in 1973 heading the DNA Enzymology group for 10 years before moving to France to found the CNRS Mutagenesis Unit as the CNRS research director at the Institute Jacques Monod. Finally, nominated Professor of Medicine moved to the University R. Descartes-Paris 5 Medical School Necker in 1998 to head for 12 years the “Evolutionary and Medical Molecular Genetics” INSERM Unit 571 (now U1001). The professional and personal life of the PI was marked by the privilege of having spent considerable time with several giants of molecular biology (M. Meselson, M. Perutz, F. Jacob, S. Brenner, E. Witkin, F. Sanger, J. Watson, W. Gilbert, M. Ptashne, etc). The PI was the youngest EMBO member, youngest professor at the University of Brussels and is recipient of a dozen of awards. In the scholarly book “The century of the gene” (Harvard University Press, 2000) by Evelyn Keller Fox, this PI is the fifth most frequently cited scientist.

Nothing looks standard in PI’s career; it was always the search for new vistas, asking new questions, using a variety of experimental systems from bacteria to mice, and often creating new methods. Even the way his INSERM Unit was run is unorthodox: with his former PhD students Ivan Matic and François Taddei, the PI was running a large research unit called the TaMaRa lab (for Taddei, Matic, Radman) for an effective triumvirate. As the director, M.R. signed no more than 25% of his laboratory’s papers over the last ten years: only those with his personal projects, with no more than 3-4 pre- and post-doctoral collaborators. With Matic and Taddei, today leaders in modern microbiology, systems and synthetic biology and nano-biology, PI shares all material and intellectual resources resulting in what is today publication-wise the most productive laboratory in France (when normalized by scientist, or by euro).

M.R. has trained over 60 PhD students, a dozen of whom became professors and lab directors in major academic institutions in Europe, USA and Japan.

PI’s special achievement and passion is the foundation of the Mediterranean Institute for Life Sciences in Split Croatia (www.medils.hr): a fully independent, private, non-profit international institute for “thinking the unthinkable” –that started three years ago.